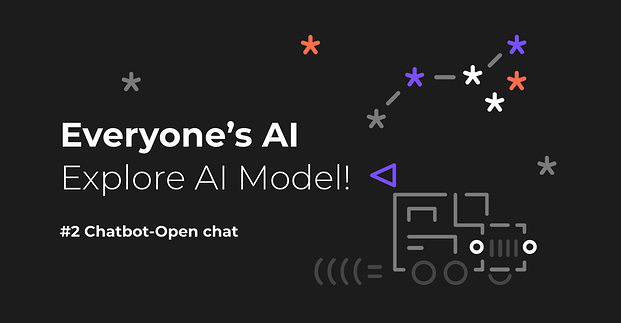 Hello! I’m writing about an artificial intelligence model at a company, and I’d like to share it here. You can check out the article here!

Have you ever said something like, “Siri, set the alarm again in five minutes” when you want to sleep more? While watching the YouTube video, you may have seen at least once that the comment, “Unknown YouTube algorithm dragged me here,” received high sympathy and was recorded at the top.

This is the time when we cannot discuss our lives except ‘AI’. We are having days of growing interest in AI and data. There are many people who are interested in related fields, but have difficulties in how to get information and share experiences. For those people, I’m going to organize the contents and share them in a series.

The first AI model I will introduce is “Hyunwoongko’s Open chat”.

Hyunwoongko is currently working at Kakao Brain and researching natural language processing at a startup called TUNiB. This model allows you to easily access open domain chatbots based on BlenderBot and DialoGPT which allow you to have conversations with artificial intelligence with just 3 lines of code. (You can easily install it with pip install openchat .)

If you would like to check the project right away, please refer to the following link. 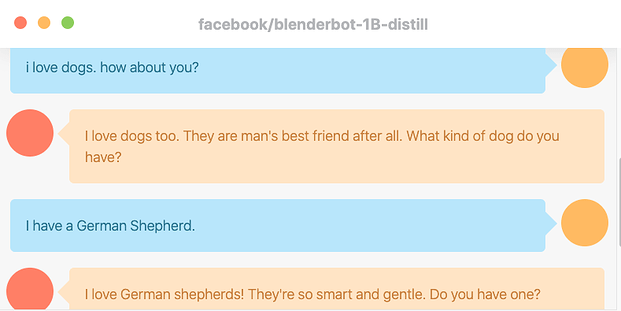 What is a chatbot?

What comes to your mind when you think of ‘Siri’? Twenty years ago, you might have associated the name “Siri” among your friends or acquaintances, but now Apple will surely come to mind. Siri is one of the chatbots we’ve described so far today. The starting point of this chatbot seems to be ELIZA, which was developed in 1966 by the MIT Artificial Intelligence Lab. At this time, ELIZA used a simple pattern matching technique and it used to be just an early developed artificial intelligence. Now, when Siri was released in 2011, there were issues about the usefulness of Siri, but its ability to grasp the context of the conversation was amazing and it was the inspiration behind the movement to apply chatbots to everyday life. Over time, with the advent of AlphaGo, artificial intelligence has been attracting attention, and interest in artificial intelligence models that can naturally process language has increased, and natural language processing models have developed a lot. Accordingly, models such as GPT and BERT were introduced, and the parameters of these models were fine-tuned to suit a new purpose, further enhancing the chatbot’s performance. The future growth potential of chatbots is expected to be very high.

What model was used in Open chat?

In Open chat, you can choose a few language models such as “BlenderBot” or “DialoGPT” to have a conversation. In this case, the language model is a model that calculates and learns numerically how natural the language provided by any given person as training data, and assigns probability means. Let’s take a look at the features of both models.

Shall we blend the data? : BlenderBot

BlenderBot is an open domain chatbot model announced by Facebook. BlenderBot used in openchat has 4 models with different number of parameters, each with 90M(small), 400M(medium), 1B(large), and 3B(xlarge) parameters. Pre-learning was conducted with the Fairseq toolkit, an NLP framework developed by Facebook AI Research, and the pre-learning data set was conducted with articles that match the conditions among articles written in Reddit. For fine-tuning, we used the ParlAI toolkit developed by Facebook AI Research, which provides a variety of chatbot models, training, and data sets. The datasets used in fine tuning are: ConvAI2 (data set related to personality), Empathetic Dialogues (data set related to empathy), Wizard of Wikipedia (data set related to knowledge) and Blended Skill Talk (mixed data set presented earlier). By using Blended Skill Talk, this model helps to maintain learning outcomes from previous datasets (ConvAI2, Wizard of Wikipedia, Empathetic Dialogues). Detailed information about the model can be found in Here.

To briefly summarize this model

DialoGPT is a chatbot model announced by Microsoft. As the name implies, it is designed based on the architecture of GPT-2, and it is a model that has been transformed to fit into a conversational format. DialoGPT used in openchat has three models with different number of parameters, each with 117M(small), 345M(medium), and 762M(large) parameters, which is smaller than the number of BlenderBot parameters. The data set used for training was filtered out of the articles written on Reddit from 2005 to 2017, and then used for training. Also, there is a URL in the source or target when the target has at least 3 word repetitions, and when none of the top 50 (a, the, of …) frequently appearing English words are included (determined in a foreign language). These conditions and such containing aggressive words, became filtering conditions and were not used for learning. After filtering, about 140 million conversations were formed. Detailed information about the model can be found in here.

To briefly summarize this model

“A dwarf on a giant’s shoulders sees farther of the two.” — George Herbert

In order to use a chatbot like the above, you need to look at the paper that introduces the model and design the code according to the method presented in such paper. You also need to get the data to train the model, and prepare the GPU to create a learning environment. I particularly find the above method inefficient for a task that requires a lot of time and effort to be invested but we can easily see the big picture with the help of the open source giant. Since many open source developers distribute their results as open source on behalf of their work, using a chatbot distributed as open source makes it easier to use the chatbot. Loads of sites distributing open source include GitHub, Hugging Face, Ainize, and more. Hugging Face is an AI community with models provided on Facebook, Google, and Natural Language Processing (NLP) libraries as open source in a small offer. Ainize is a service that provides various functions for open source, such as distributing open source AI projects and converting open source code to extensible API services.

So how do you use it?

First, install Open chat, then enter the desired model and size as parameters, and run it, at this point you will be able to use Open chat.

This time, I will run Open chat through the Open chat DEMO provided by Ainize without installing Open chat. 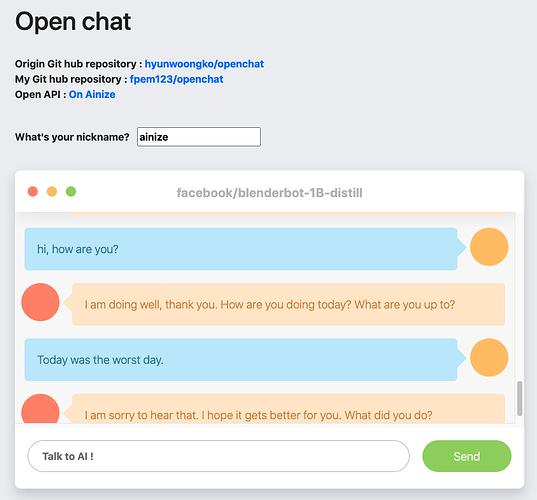 1_jLMv1FVNLCtH6Xe2eIGbFA845×786 47.6 KB
After entering the demo page, you can complete the nickname creation and you are ready to go. After that, if you press the Send button after writing the desired word, the entered word is sent and the answer is returned. The DEMO used above can be used in here.

You can call it in the same way. After that, if you wait for a while

You can get a response like More details can be found here.

Currently, the use of chatbots impacts only a small fraction of our daily life. There are two reasons for this. First, the chatbot doesn’t fully understand what people are saying as the human conversation is very complex. Not just because you understand the meaning of words, you can communicate, but you also need to understand the context and intent of the conversation. It is very difficult for artificial intelligence to learn complex conversational methods for humans like this. Second, there is not enough data to train a chatbot model. A famous saying among people working with artificial intelligence is “GIGO” (Garbage-In, Garbage-Out). This means that if you train with poor quality data, you will get poor quality predictions. In order to improve the performance of chatbots, high-quality data is required, however this is not something that can always be achieved.

Although, if these problems are improved, chatbots will be more likely to be used in more fields than they are now. One of the areas where chatbots will be used in the future is education. For example, when seeking information most people tend to be ashamed of asking for help. Perhaps the reason you haven’t tried to get help from someone is because you might hear a response similar to “Can’t you do this?” when you tried to get help before. But chatbots don’t provide this type of answers. This is probably where chatbots may outperform humans in terms of education. Machines cannot evaluate or judge people so no matter how many times you ask the same question, the chatbot will give you the same answer without complaining. With time the chatbot’s performance will improve and if you take advantage of the characteristics and answers of the chatbot its usefulness in the field of education will increase.

This article was written using a model that is based on common interests in the community. Can you easily tell whether this was written by a human or a machine? Let’s find out with the next article. Thanks for reading!